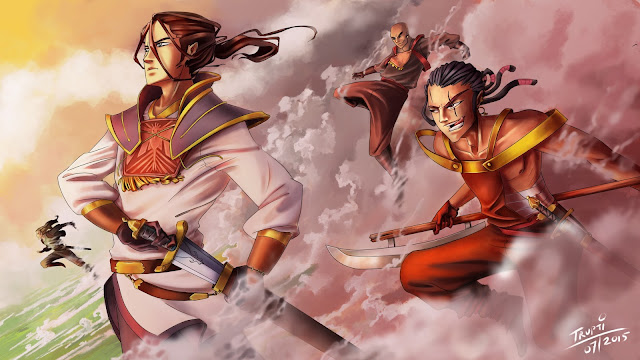 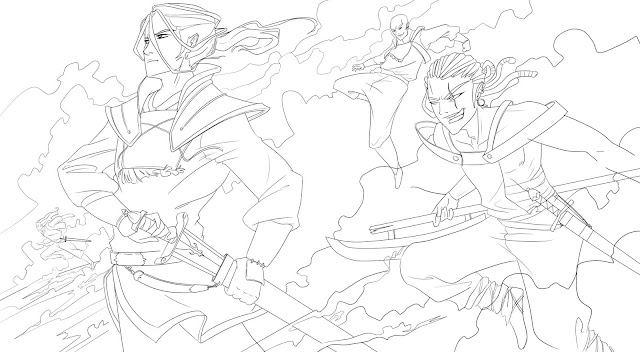 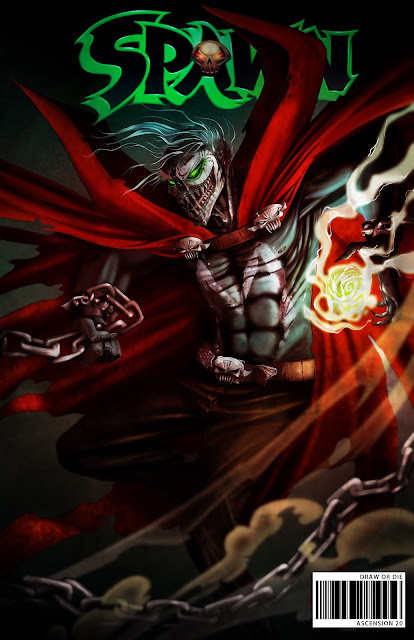 Posted by Trupti Gupta at 21:41 No comments: 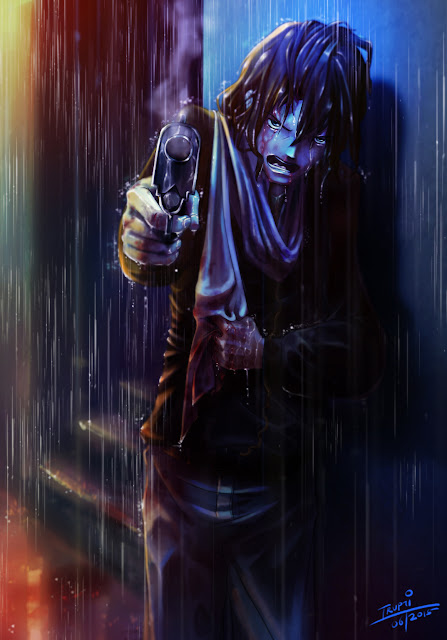 Posted by Trupti Gupta at 21:40 No comments: 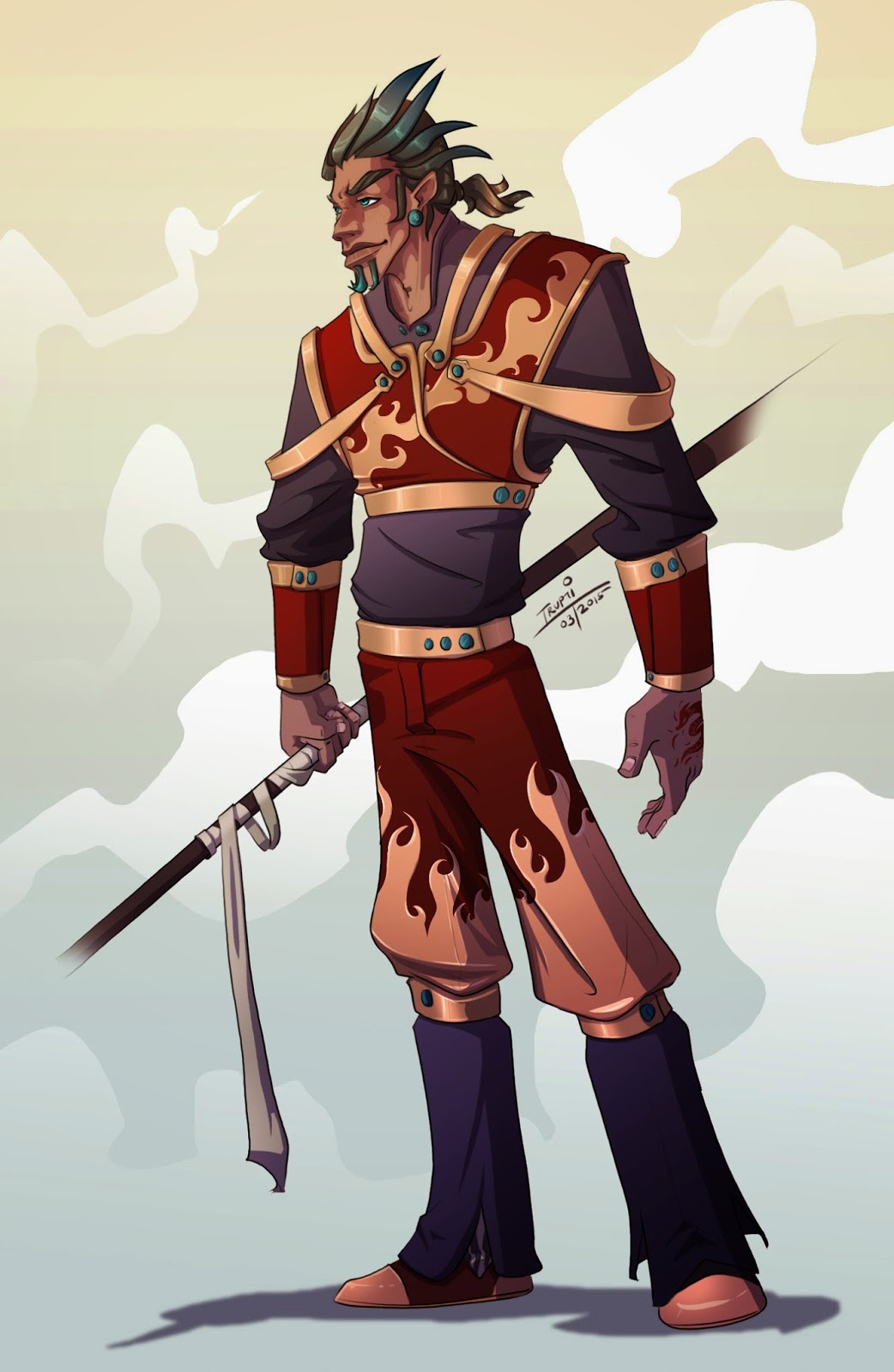 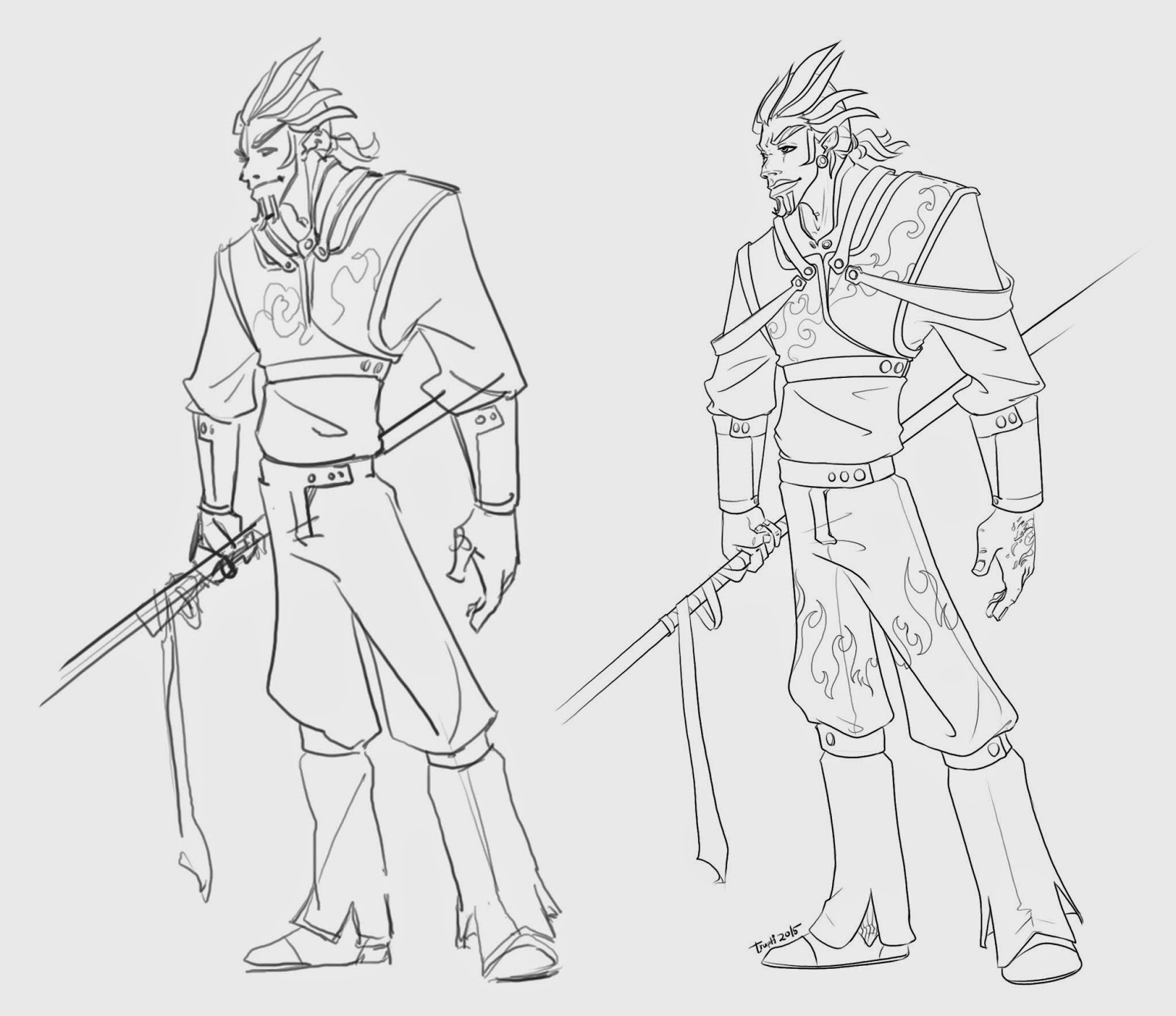 Posted by Trupti Gupta at 03:15 No comments: 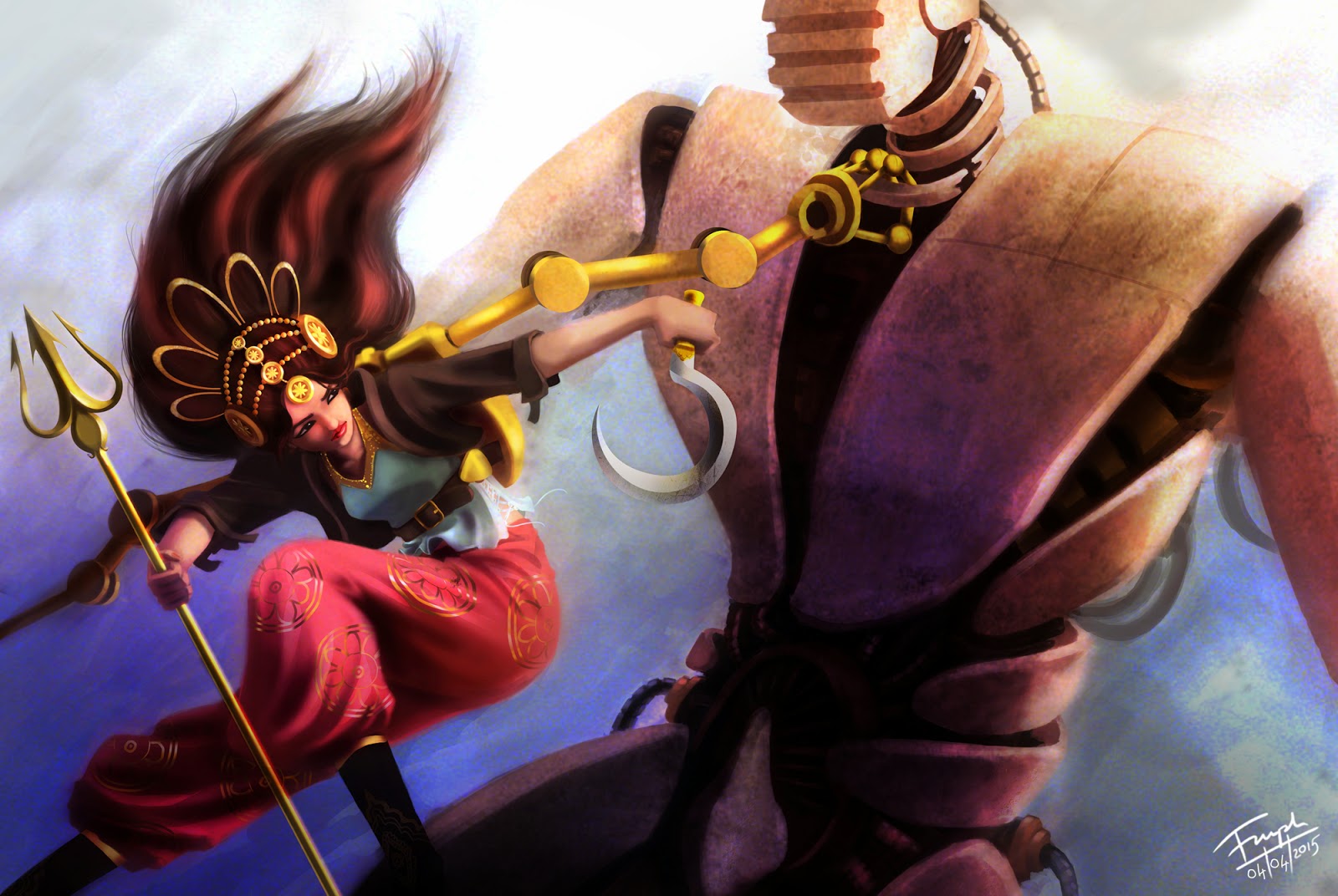 She is a tall woman with dark complexion. Not too thin but not fat either. She keeps her long black hair tied but only at the top, the rest falls freely behind her. Her face is slightly rounded, with features that are delicate but also deadly at the same time. Her red lips are the highlight of her face. She is a cigarette smoking, gun wielding woman who absolutely knows her way around weapons. He wears a short black jacket over her blue top. Her pants are kind of a mixture of a dhoti and pants. This woman likes to keep trophies. Around her neck she wears a long garland made of the heads of the enemy she had killed. (Besides this you are free to add more accessories and clothing that fits the genre.)

Kalika, has two extra mechanical hands – well these don’t really have to look like hands. It could just be a mechanical contraption or something that she has put together to help her block attacks, lift heavy stuff. Her main weapon is the Trident (Trishula) but she also has a sword strapped to her back.
Posted by Trupti Gupta at 22:47 No comments: 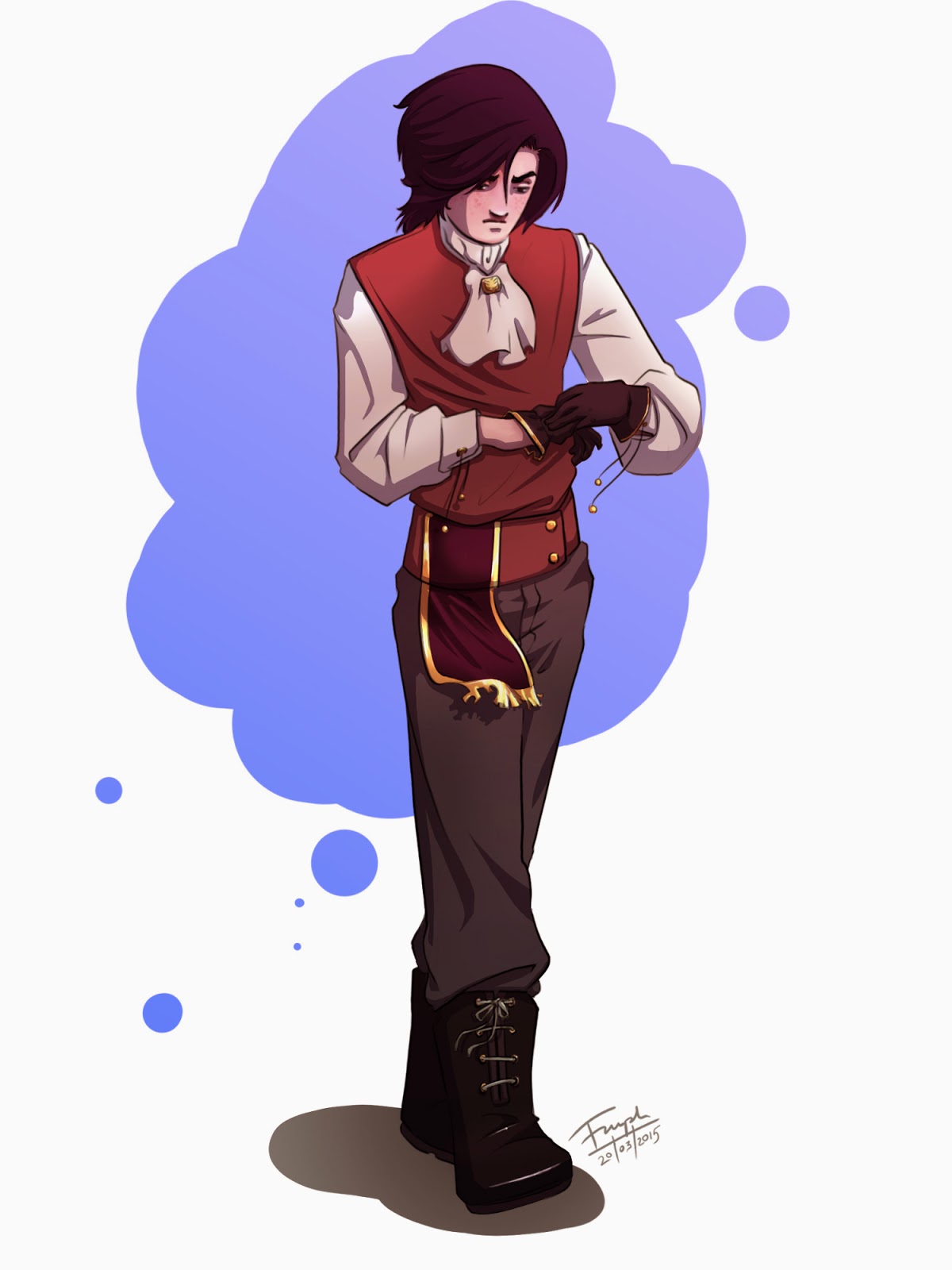 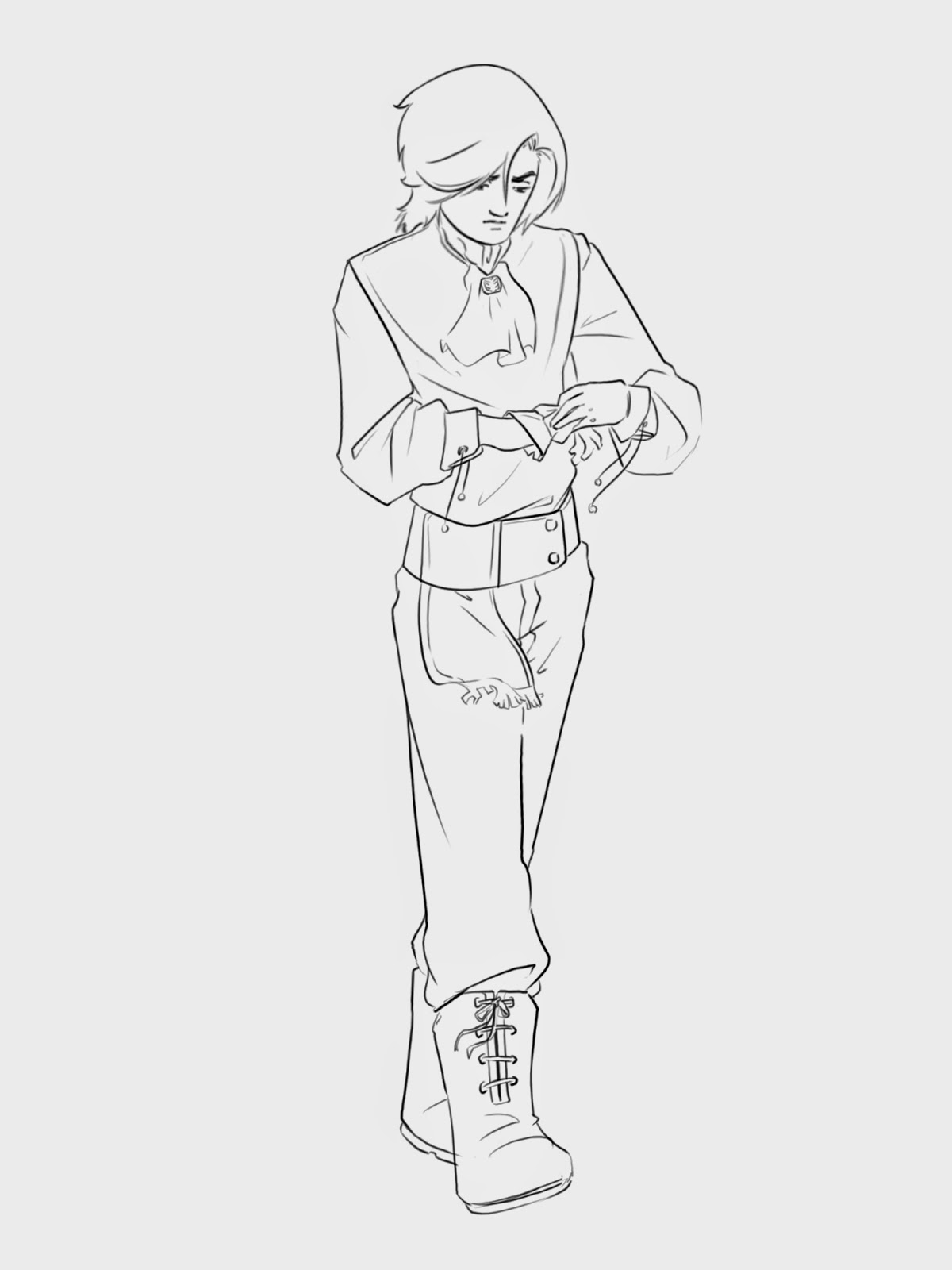 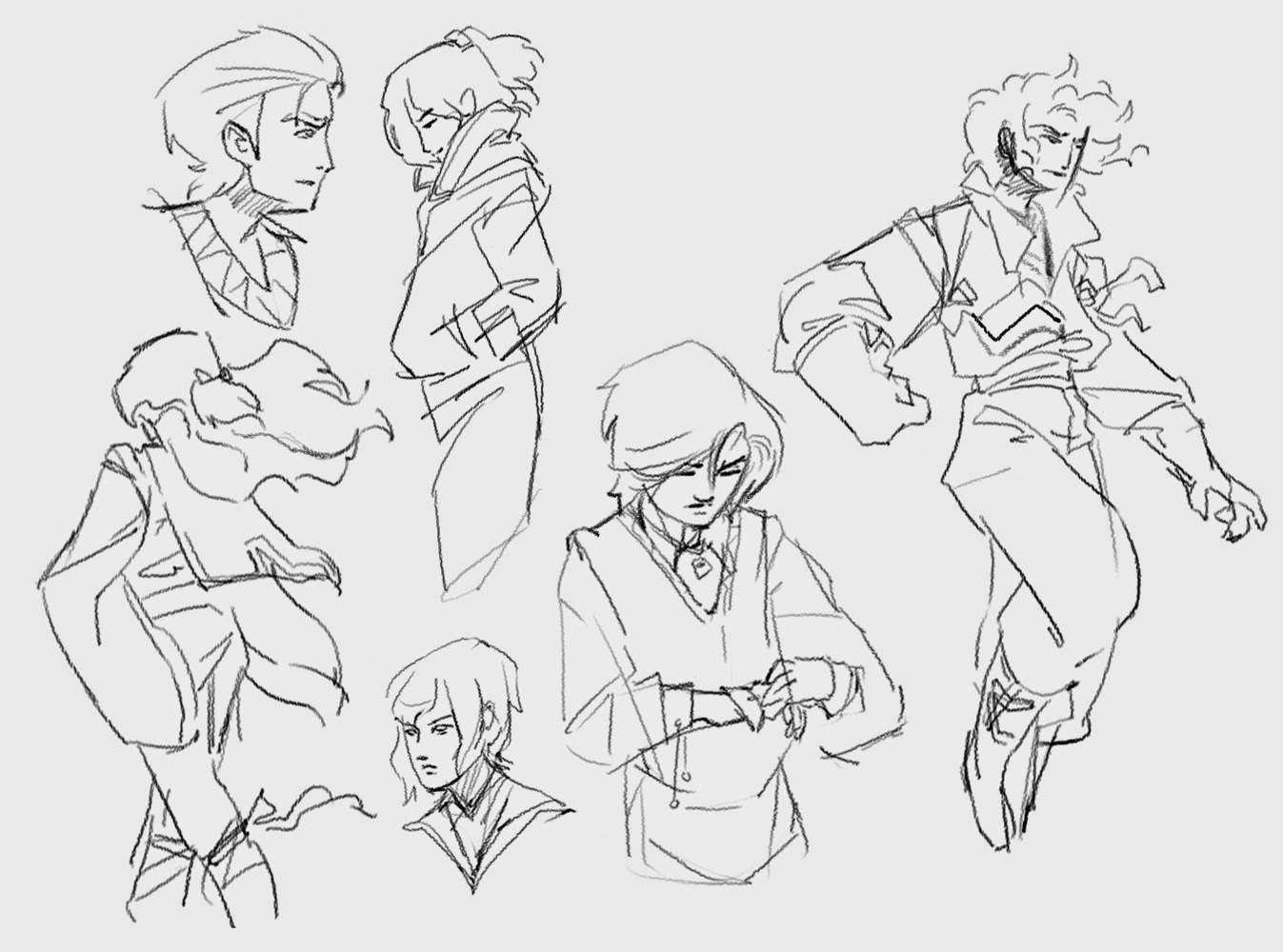 Posted by Trupti Gupta at 20:58 No comments: 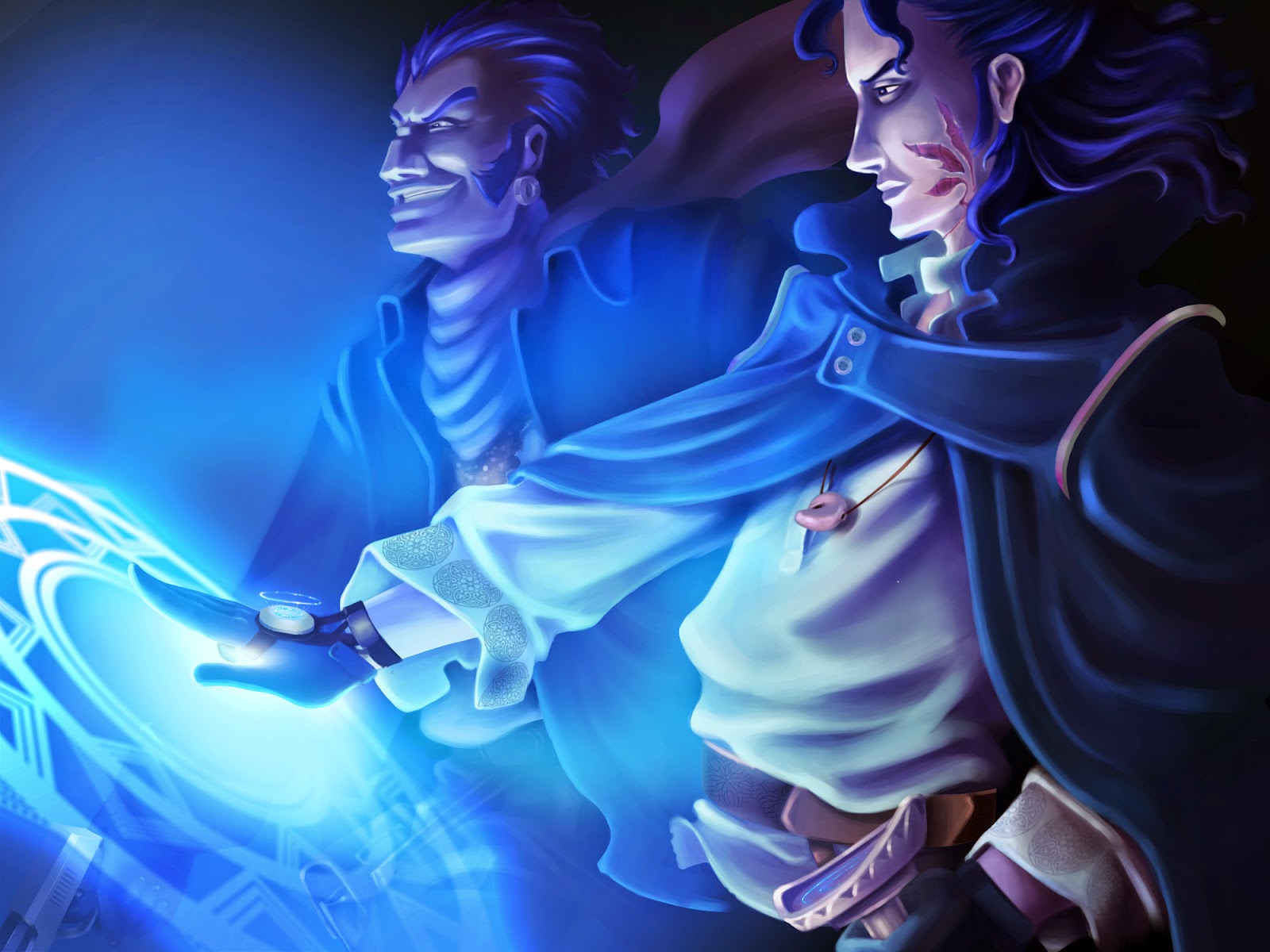 The year is 2120. We are looking at having the characters set in India, a futuristic India. There is progress, but at the same time, there isn’t. There is a giant rift between the privileged and the poor. Some people have just accepted their fate. They live and die without questioning anything at all. But there are some that are fighting against the injustice. They are the ones desperately trying to mend the rift. The privileged, have them completely overpowered though. They have the means to easily neutralize the rebel groups. But the tiny outbreaks of the rebels are kind of a source of entertainment for them. Their struggle and desperation fuels the devilish joy of the privileged. They have decided to let them play the game. A bit more color in the otherwise dull world.

Mankind is at the brink of chaos.

So in this challenge we will be drawing Vishnu and Garuda. Our approach to the art will not be in the typical mythological form. We will take the idea and transform it into a futuristic setting with a sci-fi feel.


Vishnu: the preserver and protector
Vishnu is reincarnated in the year 2120, to restore peace and order in the chaotic world. He is a young man of 24, who seems to have lost his memories. But as time passes, he understands what his purpose in this world is. He is here to restore peace. And ultimately people call him Vishnu, relating him to the long forgotten god from the Myths of India.

Personality:
He is a young man in his early twenties, with a lean but well built body and average height. His face is longish with Sharp features and calm, kind but compelling eyes. He has a scar running up the left side of his face that kind of looks like a lotus blooming. His overall personality dictates grace, humility but also power.

Costume:
Vishnu, Appears to be just another human being. His attire is nothing fancy - a simple shirt with a long navy blue coat (travelers coat, not too long but not too short either) and black pants. His clothes are clean but have an old worn out look about them. He has a pendent that looks like a shell (Shankha) hanging around his neck from a thick thread.

Weapon:
Vishnu could never be called Vishnu if he is not carrying the Sudarshan Chakra. This is fulfilled when the inventor, Vishva, creates a gadget that simulated the Chakra. This gadget, Vishnu wears on his right wrist. The weapon, when activated, kind of looks like a hologram but it can be quite a bit destructive. The gadget can be controlled by voice command and it recognizes the voice of only the person who owns it (Vishnu). This gadget in turn controls what the disc can do.
At his waist he has a golden rod – this is a weapon, when it is powered on, it turns into a mace.

Garud:
Garud is, in the original myth, Vishnu’s Vahan. Here he will be his accomplice, someone who has complete and utter faith in Vishnu. Garud, is the leader of a rebel organization who finds Vishnu and takes him under his wing. Slowly he understands the real power this wanderer has.

Personality:
Garud is a tallish, heavily built man in his late thirties. He has tanned skin that is cut and torn in various places, thanks to the war for justice the rebels are fighting. His face has very prominent features with calculating deep set eyes. His hair is a deep shade of brown and is cut short.
Costume:
As the leader of the rebels, he is slightly fancily dressed. He wears a shirt with some golden pattern running down its front. A black jacket (more like a short coat). And grey pants. This man is ready for any kind of a war situation, so he has at all times lots of weapons that he carries on him. Garud prefers to use weapons that are more traditional, he says they are more reliable. He always has a scarf around his neck. Both ends of this scarf fall behind him and sometimes they kind of look like wings.

Weapons:
He always wears a gauntlet with spiky ends.
Posted by Trupti Gupta at 03:27 No comments:

For Ascension thirteen on the Facebook Group 'Draw or Die'
Posted by Trupti Gupta at 03:22 No comments: 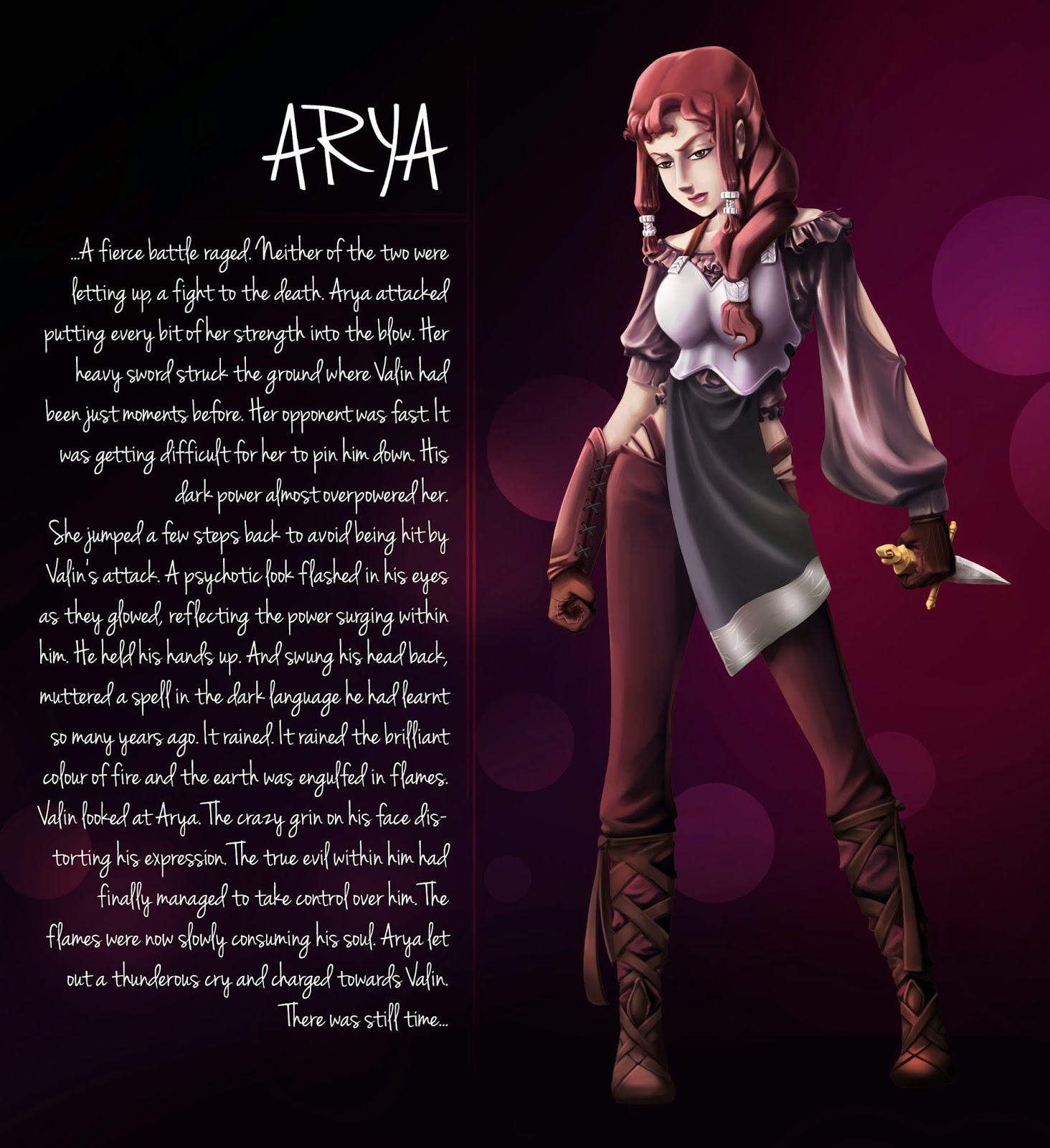 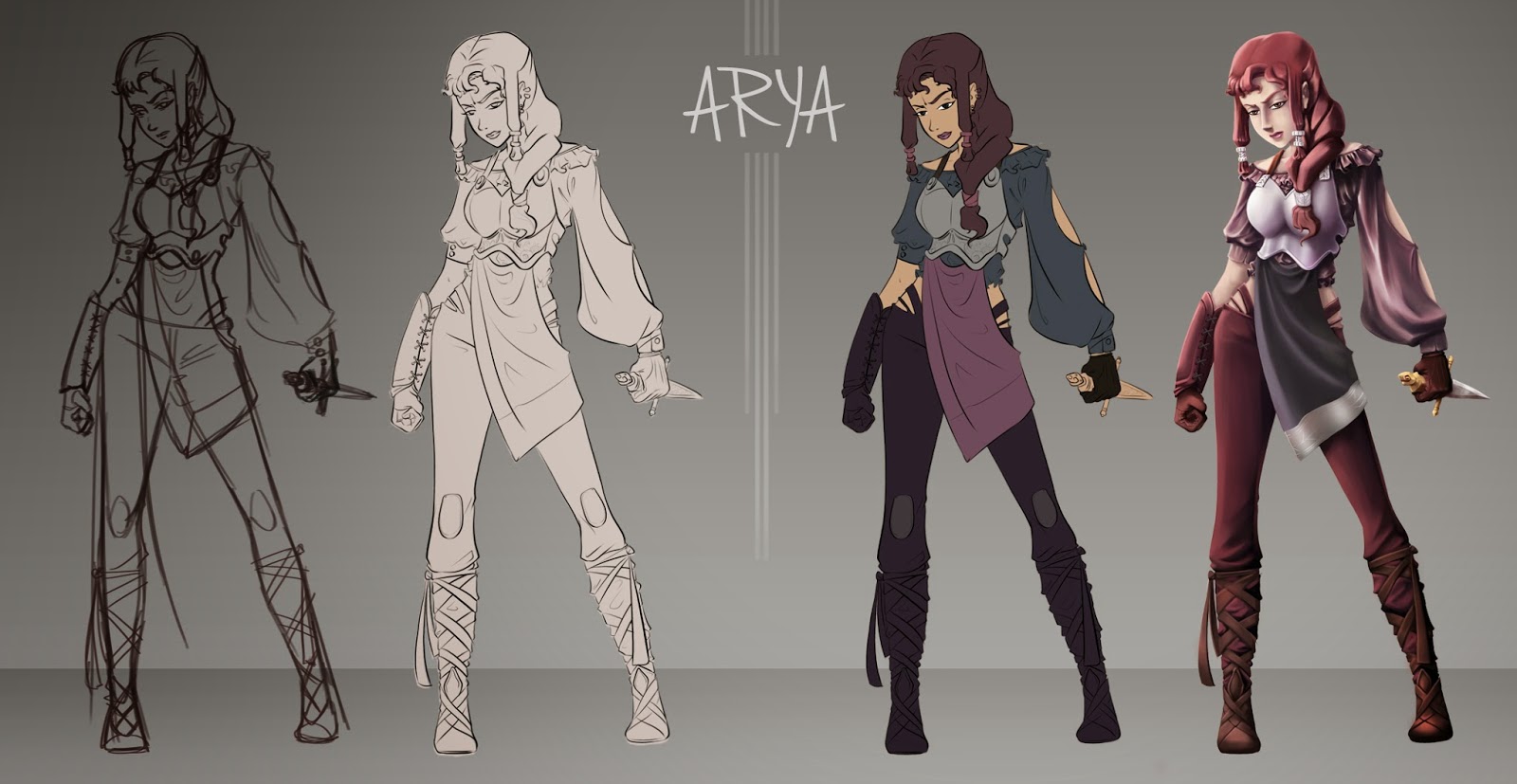 ...A fierce battle raged. Neither of the two were letting up, a fight to the death. Arya attacked putting every bit of her strength into the blow. Her heavy sword struck the ground where Valin had been just moments before. Her opponent was fast. It was getting difficult for her to pin him down. His dark power almost overpowered her.

She jumped a few steps back to avoid being hit by Valin's attack. A psychotic look flashed in his eyes as they glowed, reflecting the power surging within him. He held his hands up. And swung his head back, muttered a spell in the dark language he had learnt so many years ago. It rained. It rained the brilliant colour of fire and the earth was engulfed in flames. Valin looked at Arya. The crazy grin on his face distorting his expression. The true evil within him had finally managed to take control over him. The flames were now slowly consuming his soul. Arya let out a thunderous cry and charged towards Valin. There was still time...

Posted by Trupti Gupta at 02:54 No comments: 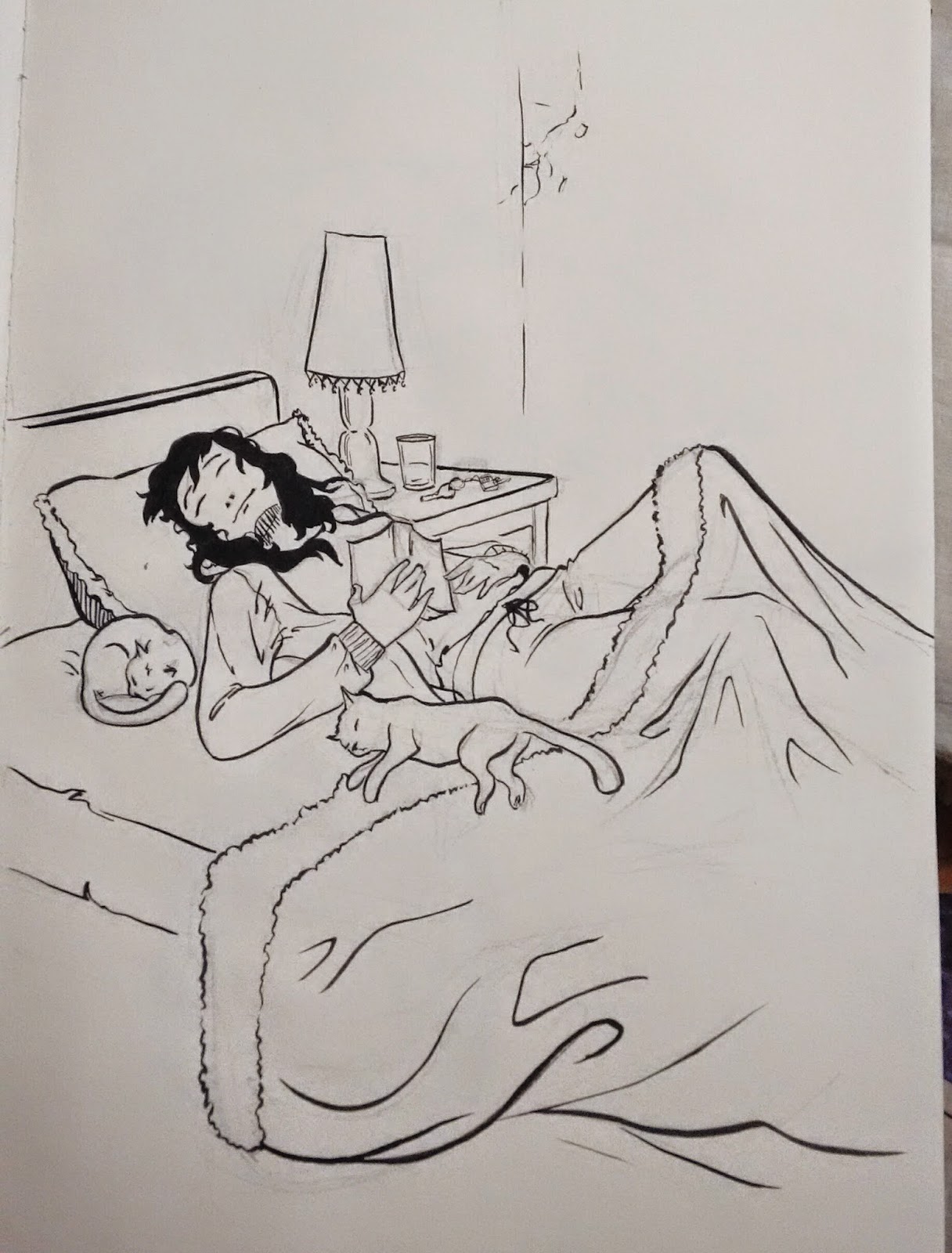 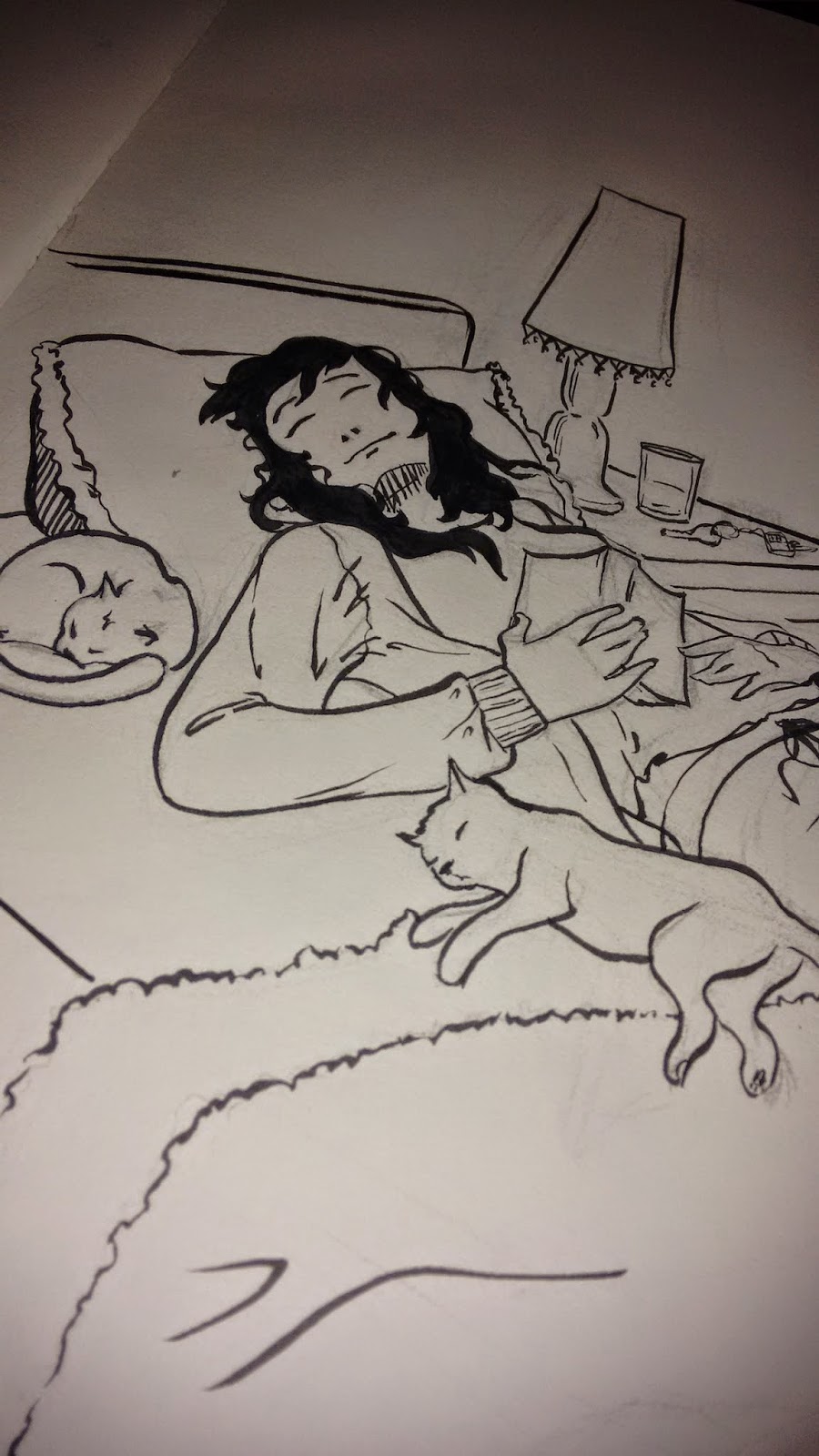 Posted by Trupti Gupta at 10:32 No comments:

based on the following:

His insignificant life stood at the threshold of death. He knew this to be true. But he cared less. Pain raging within him, ripping his will to shreds. He dragged his body off the now red ground. Blood poured out of his body from the deep gashes this pointless war had cut into him. His vision beginning to blur, in and out of focus. His sword dragging behind him he took a frail step ahead. There amidst a heap of the dead, stood the one man who had drowned the world he knew in a pool of its own blood.

With all the strength he had left in him and with what little strength the gods could spare for him, he lifted his sword off the ground and began the one final assault that would define the future of both, good and evil.
Posted by Trupti Gupta at 10:22 No comments: 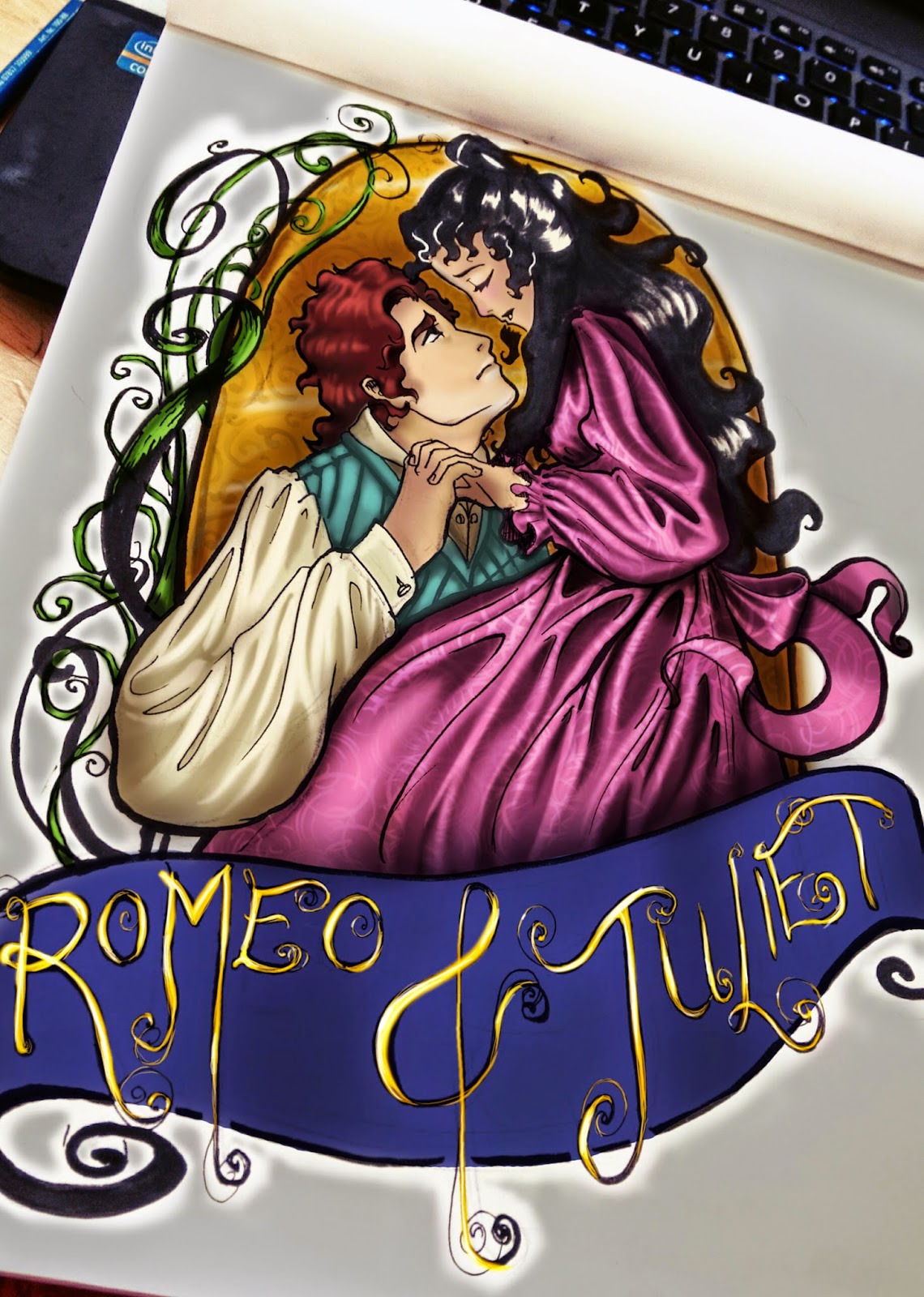 Posted by Trupti Gupta at 03:36 No comments: 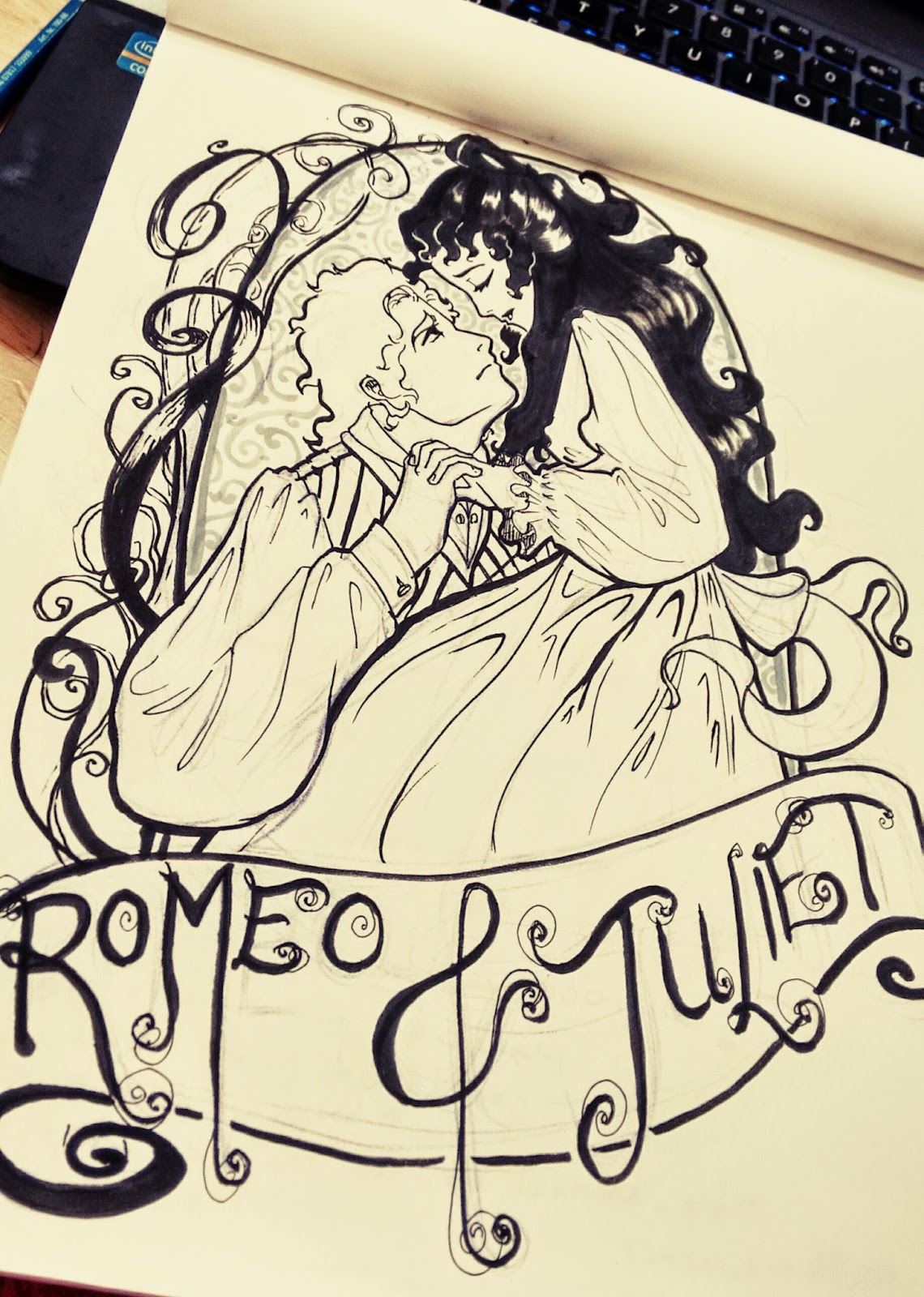 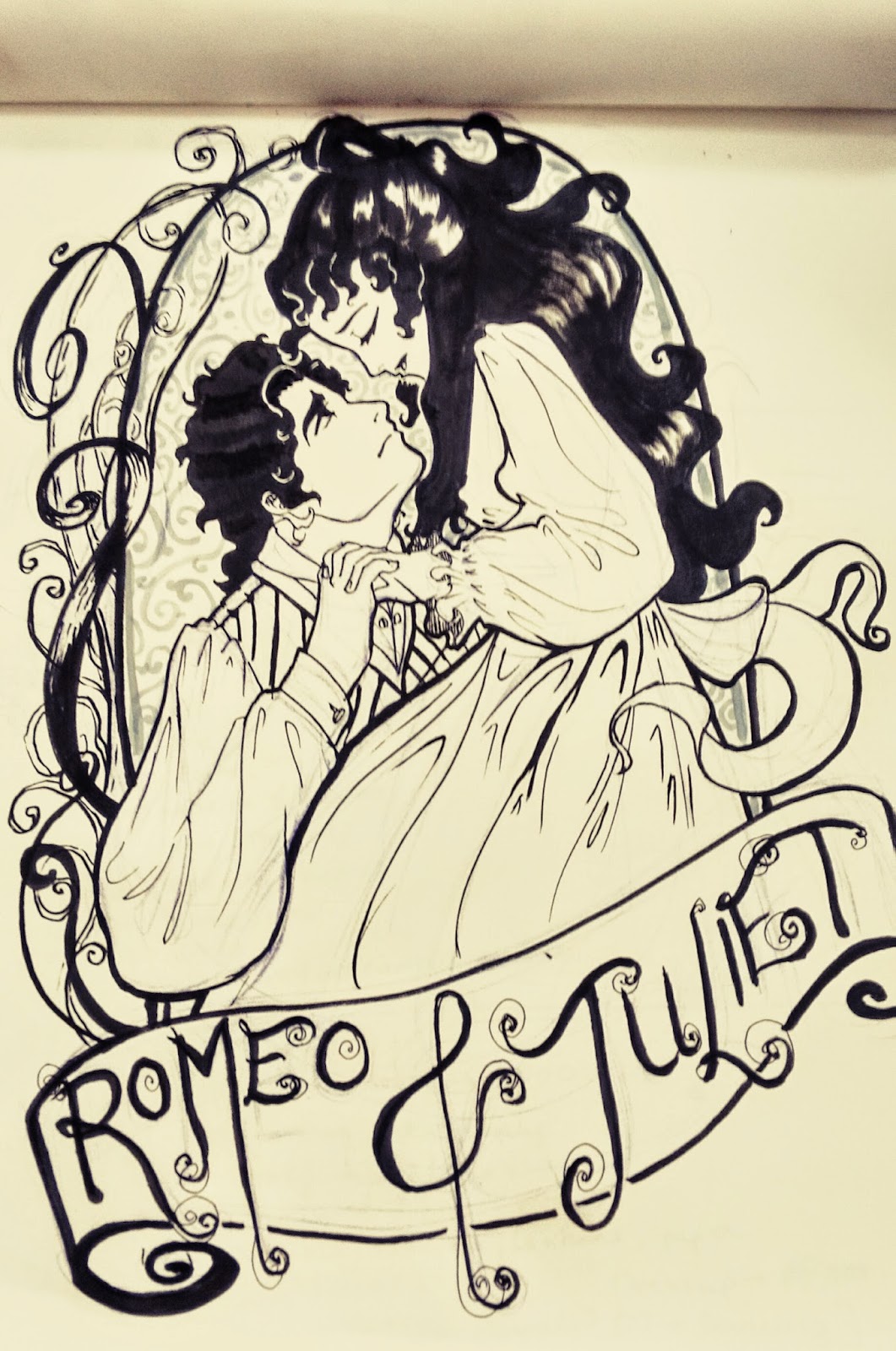 Posted by Trupti Gupta at 23:33 No comments: 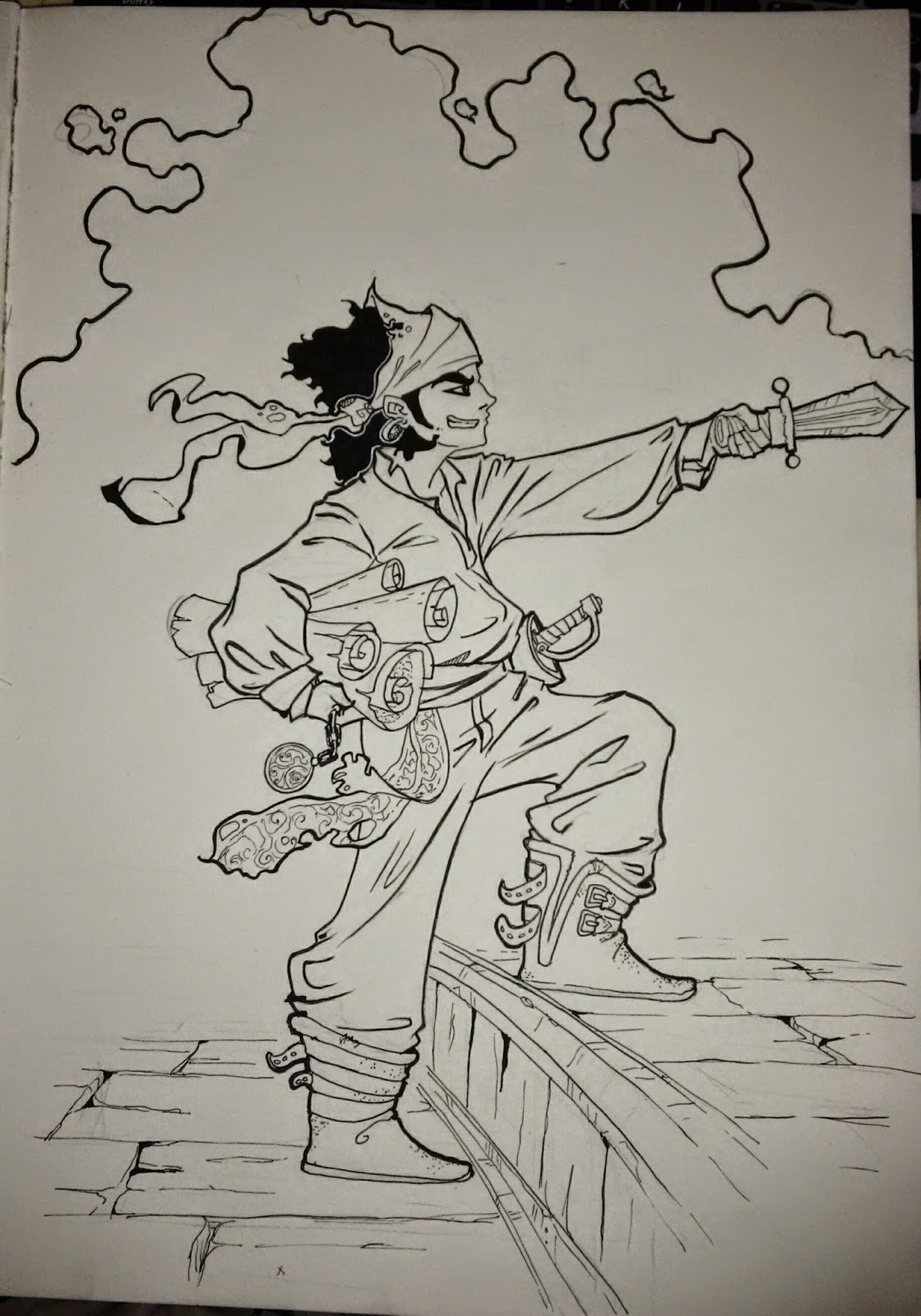 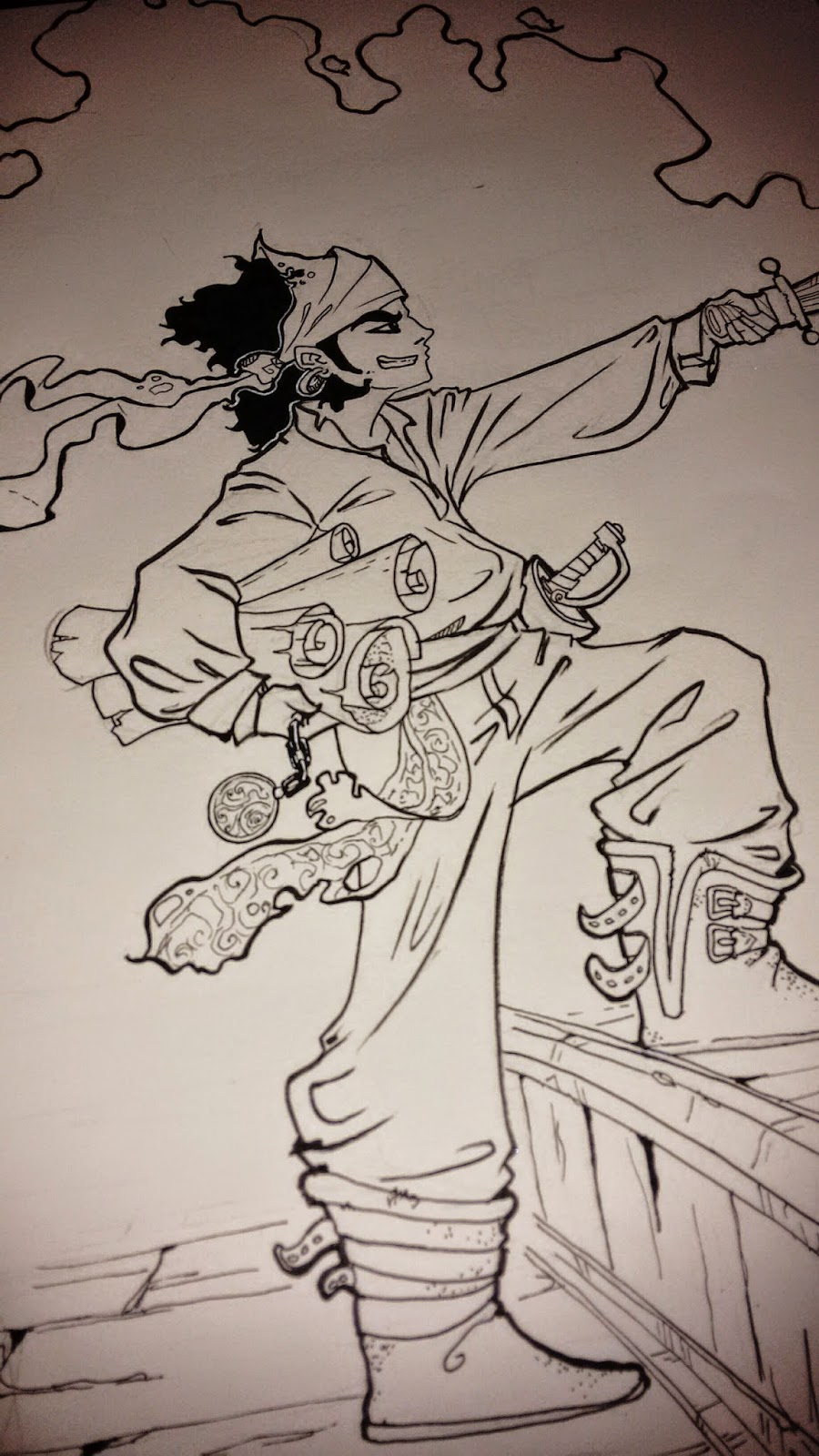 Posted by Trupti Gupta at 03:34 No comments: 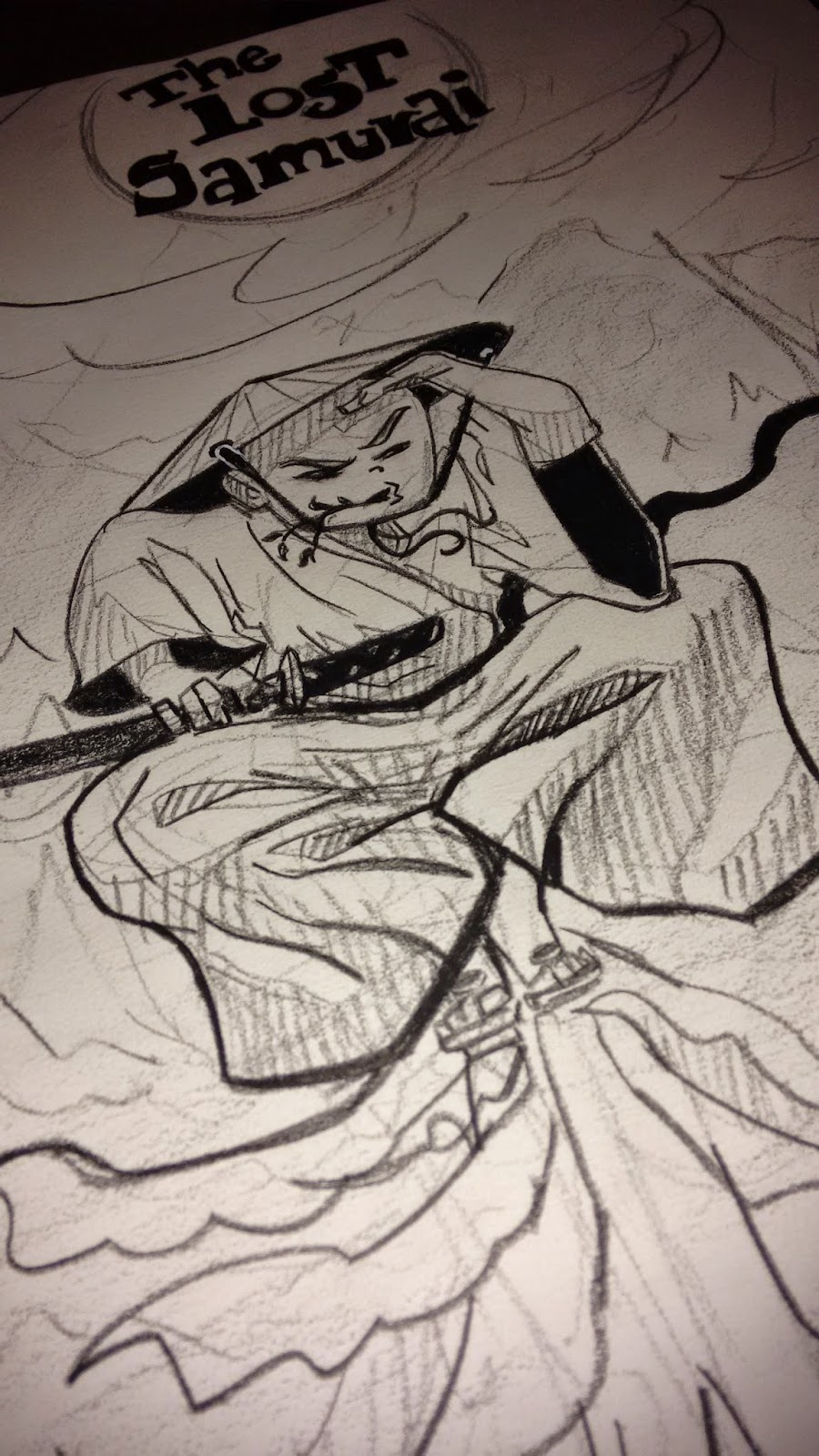 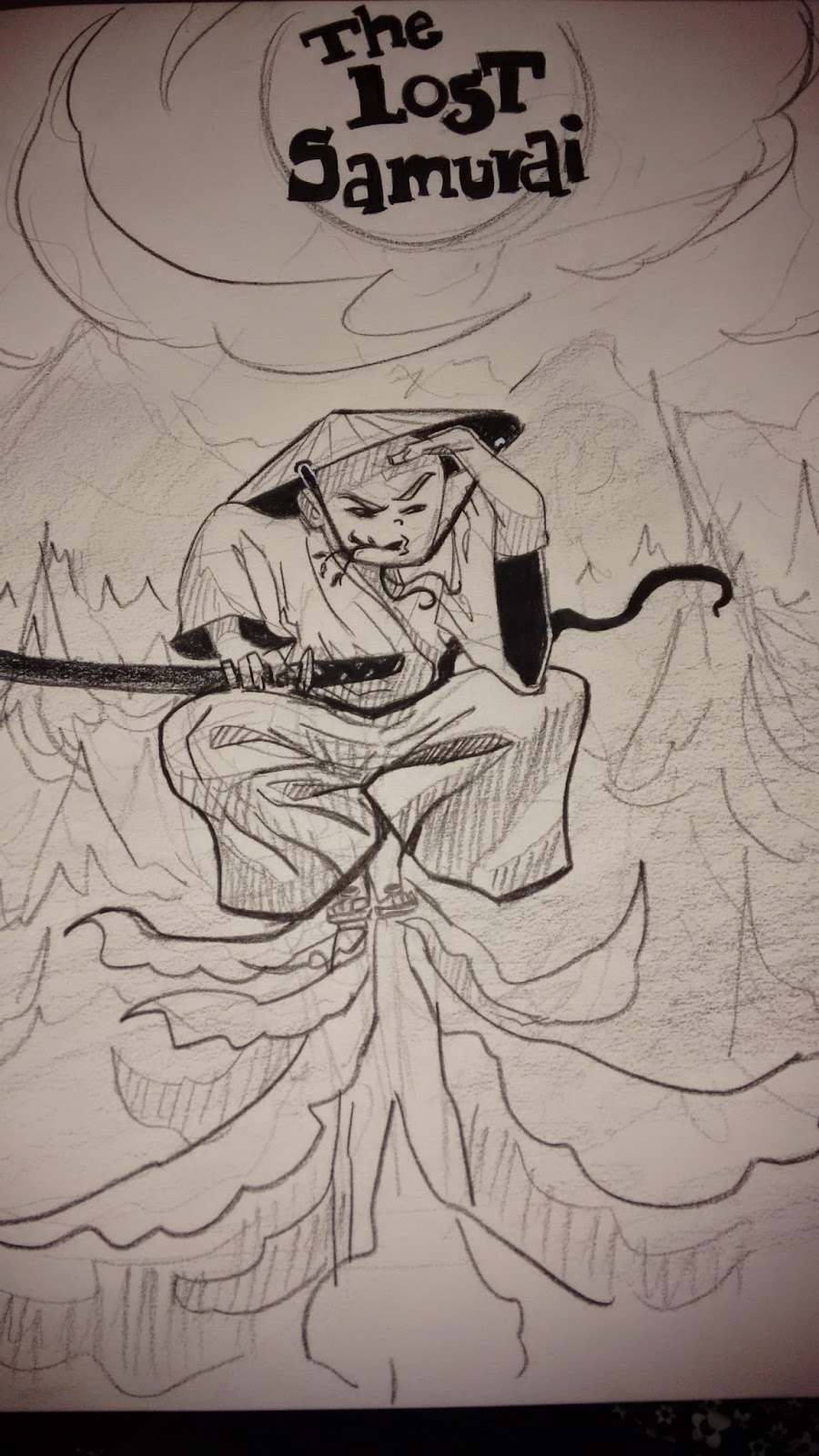 Posted by Trupti Gupta at 03:28 No comments: 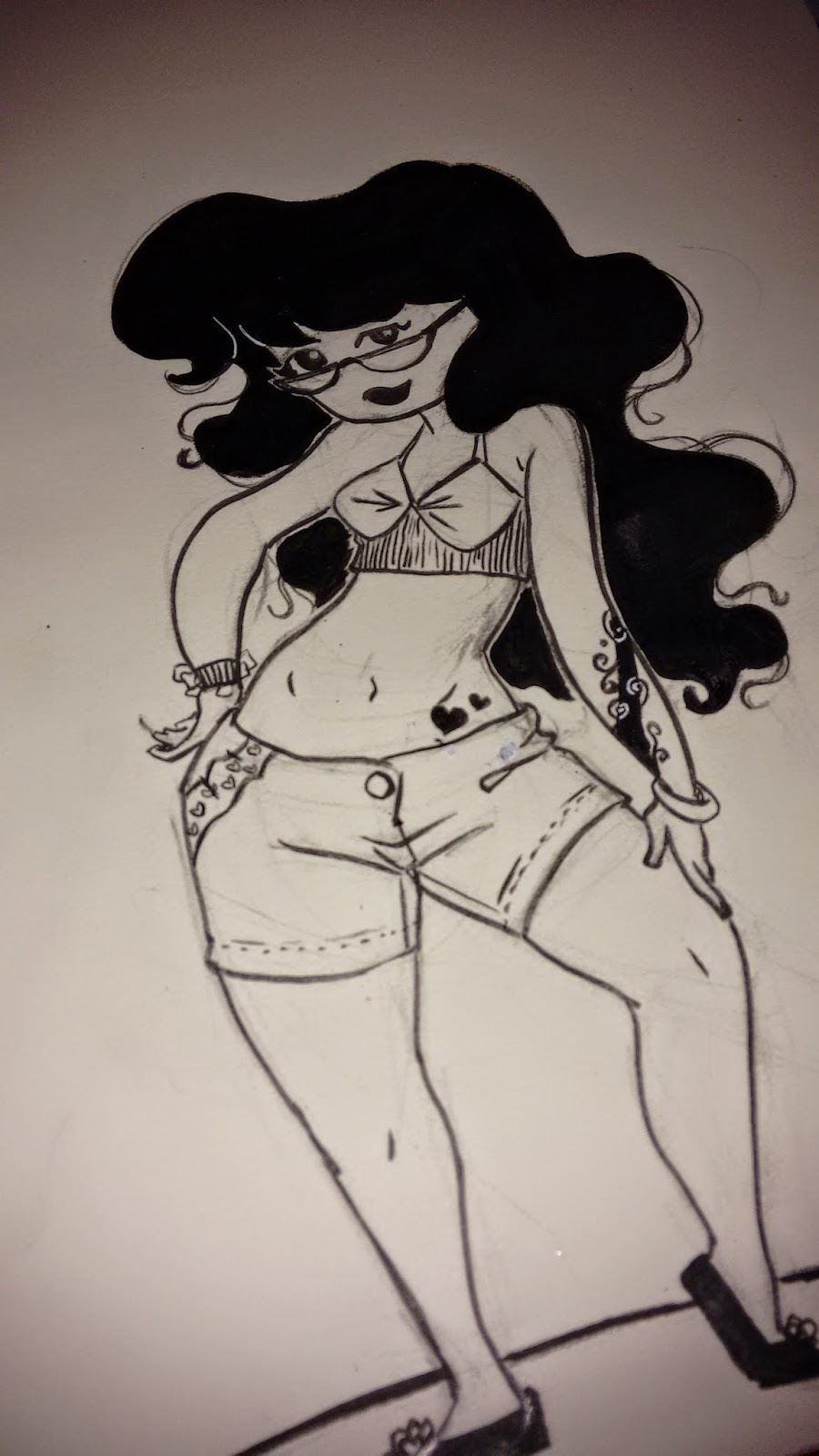 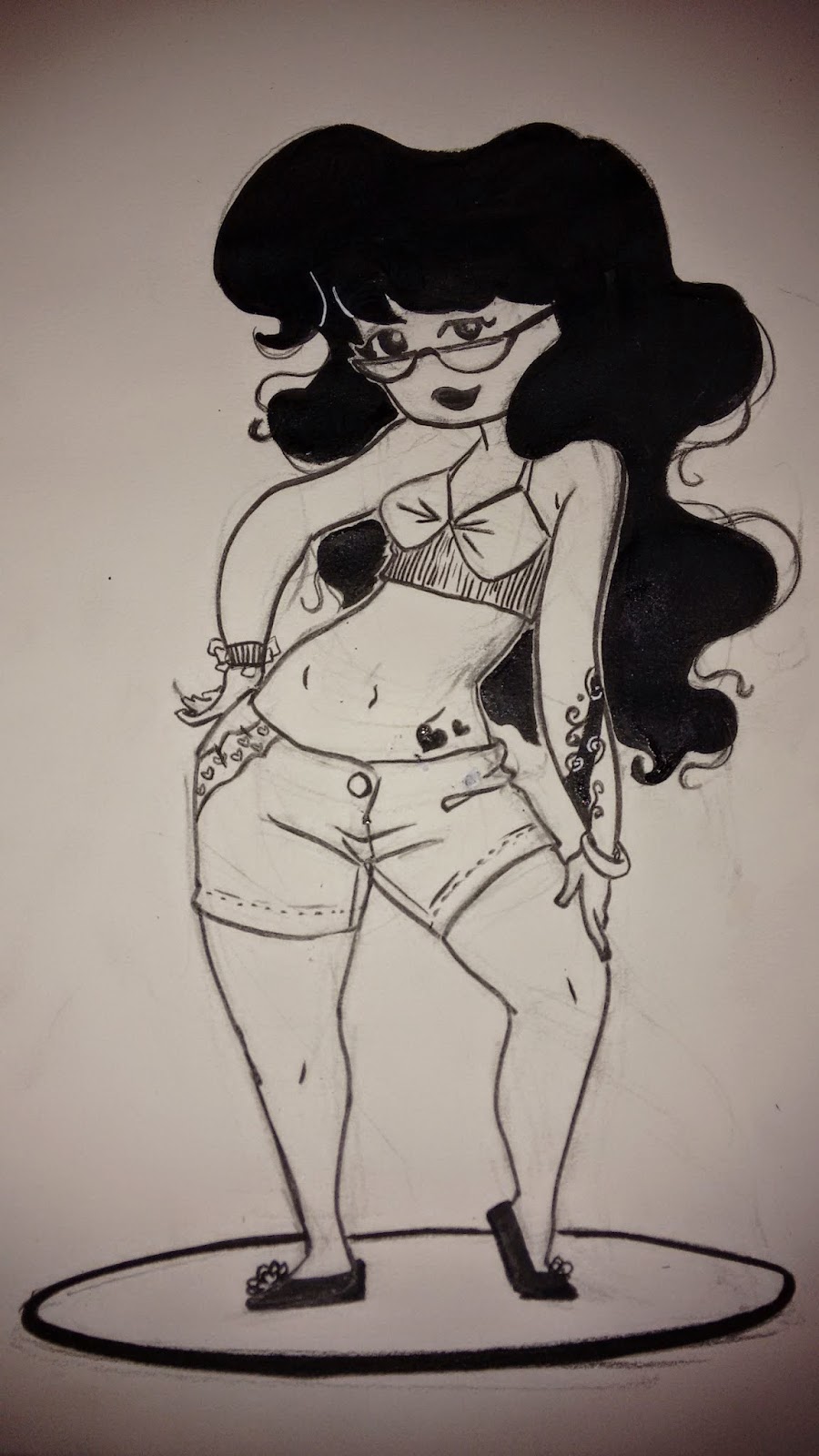 Posted by Trupti Gupta at 03:21 No comments: 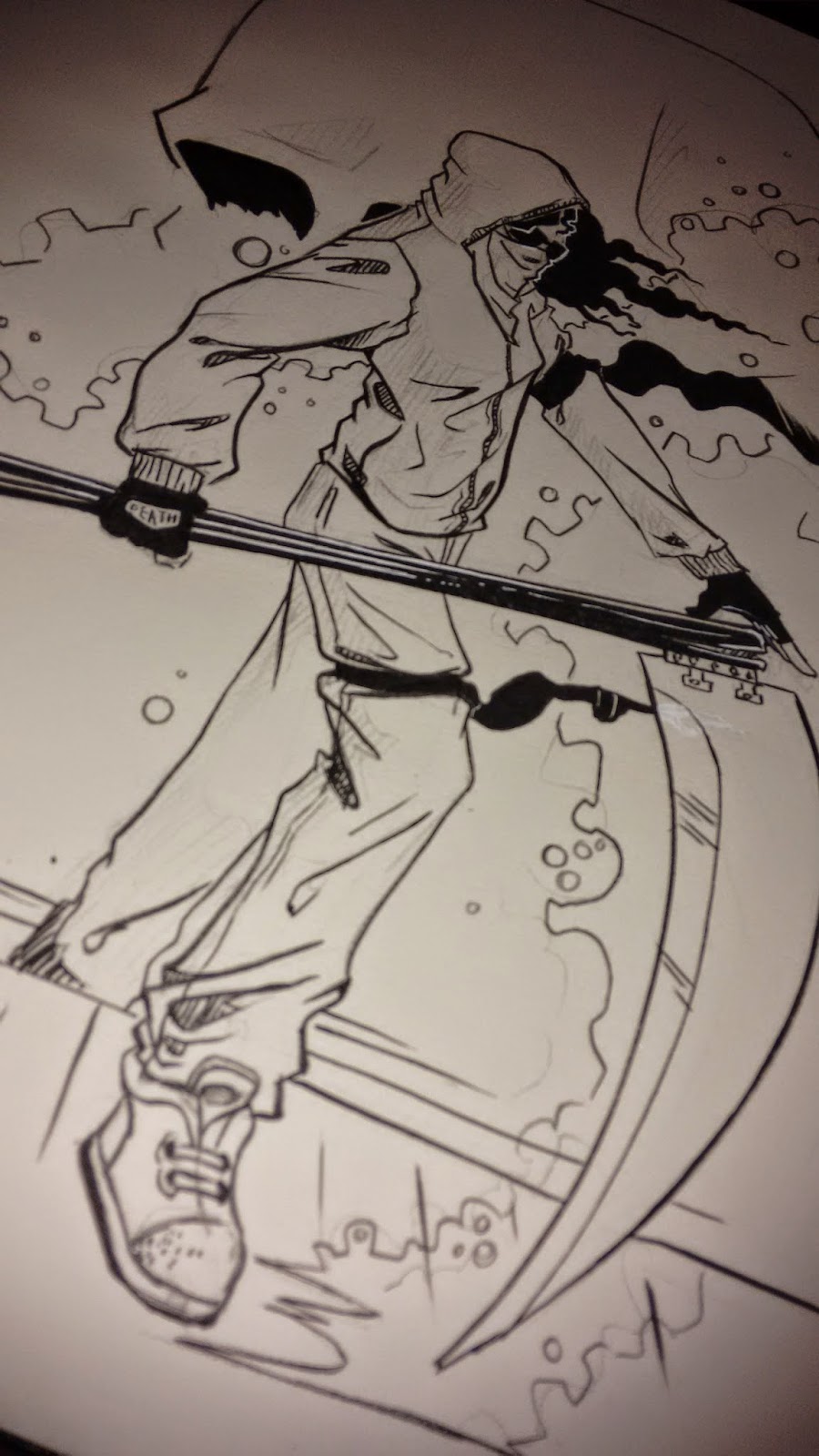 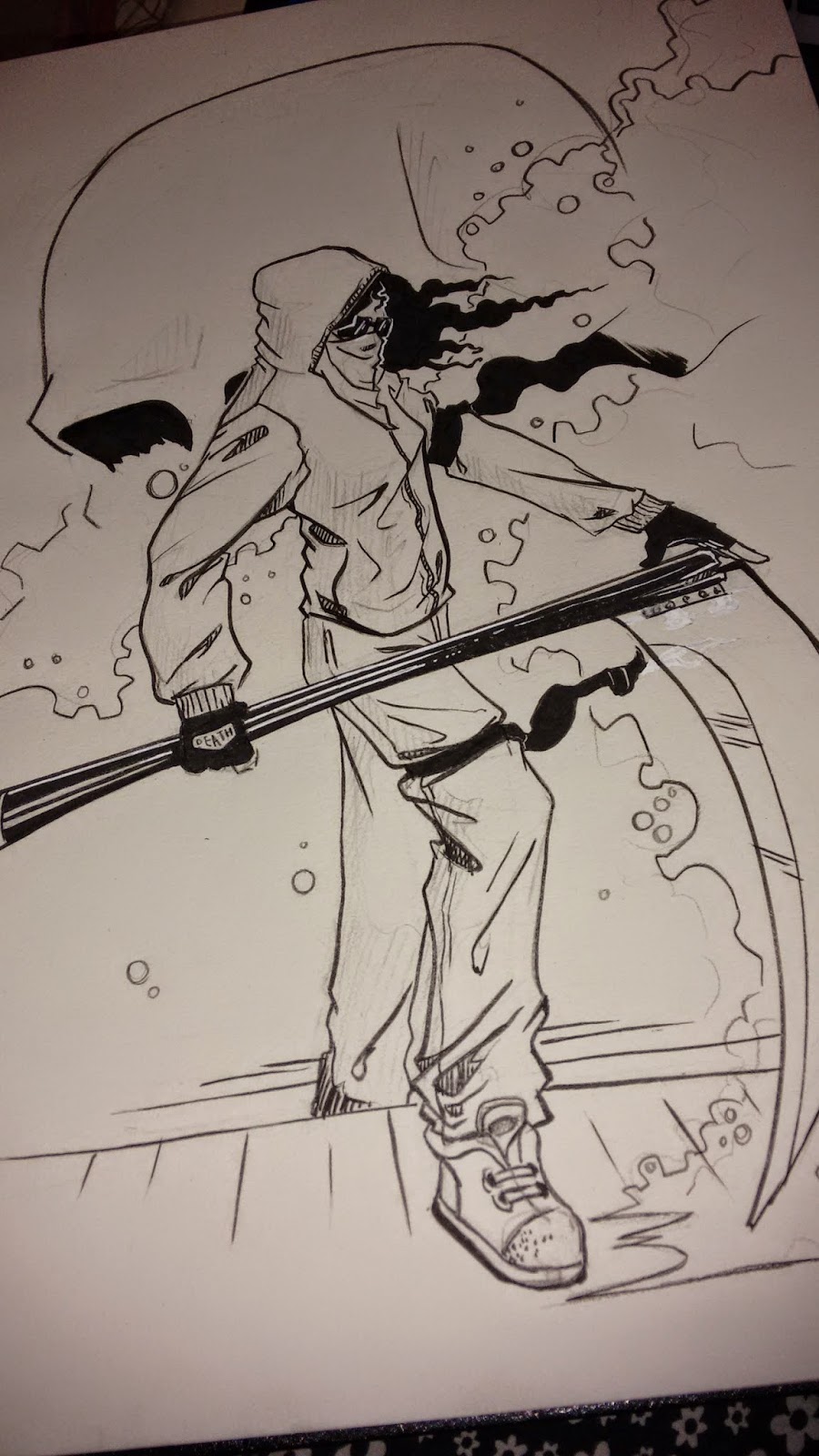 Posted by Trupti Gupta at 03:19 No comments: